Maggie smiled again and looked down at the bricks of the street. "Yes, Lord?"

"Tell me about that. Where do changes of clothes come from?" Under the Hamstard armor plate, Parson was wearing the same Hamstard T-shirt, jeans, shoes, socks, and underwear he had been wearing when he was summoned almost two weeks ago. At the start of Gobwin Knob's turn each day, his body and clothing were "cleansed," and it did seem pretty thorough. His hair was combed, his whiskers shaved, his teeth felt smooth and clean. He never stank or itched. Before the battle he had nicked his ankle messing around with a pickaxe down in the tunnels with Sizemore. The cut, the bloodstain, and the little hole in his sock were all repaired the next morning. If there was anything about this world that was a gamer's wish come true, automatic grooming and laundry had to be it.

But he still wanted a change of clothes.

"Well, it's Dollamancy, Lord," said Maggie, looking up at him. The brim of her pith helmet shaded her eyes, but little dots of sunlight from the breathing holes in it danced around on her cheeks. "This particular 'outfit'...I would call it 'raiment'...came from the Magic Kingdom. The helm was made by one of our new Twolls."

"Yeah, how do Twolls do that? Bogroll made my armor, and he put the sword together. This new guy Zhopa just made me a picnic basket." He lifted up the basket, which was solidly holding together.

"Twolls have the 'fabrication' special, which is a form of natural Dollamancy. Units with that ability can make small nonmagical items, usually armor and equipment. I understand that the next Twoll we pop will be assigned to the stables as a smith and saddlemaker."

Parson nodded. "But the rest of the clothes were from an actual Dollamancer?"

"Yes, his name is Ken. Lovely man," said Maggie. "Frankly, I haven't bothered with new raiment in a very long time. But you know..." she gestured around them, particularly at the awesome towers of the front gate they were approaching. "It's a fresh start for our side. It seems a time for renewal."

"Hm," said Parson. They walked on, in warm sunshine. The city was quiet, though some of Wanda's Decrypted infantry were always in view, standing in doorways or hanging around on corners, saluting as Parson passed. The cool breeze carried in the occasional distant sound of marching bootsteps or the clang of swords and pikes in drill exercises. "What about these symbols?" Parson slapped his chest plate. "My Hamstard crest and Wanda's skull emblem, and the Stanley posters. That's all Dollamancy, too?"

"The emblems are called 'livery,' Lord. And yes, that is a common form of natural Dollamancy. New units pop bearing the livery their Ruler desires. Twolls can fabricate items which bear their master's livery. And when a caster creates another unit, as in golem-making or uncroaking, the caster sets the livery and other features of the unit's appearance."

Parson looked at Sizemore, who had been following along quietly. "You design your golems, Sizemore?"

The Dirtamancer smiled brightly. "Yes, partly. I like to use my imagination when I can, Warlord. But I had to stick to certain basic shapes."

"So Wanda put Hamstard on the Uncroaked. To piss off Ansom, prob'ly," said Parson with a little grin. "Worked. But then on the Decrypted, she put her own livery, not mine or Stanley's. That's kind of...interesting."

"It did not escape my notice, Lord," said Maggie.

"I guess he countered with these things, then?" said Parson, pointing up to the huge Stanley-and-star-with-rays banners that hung above them. The three of them were now almost in the shadows of the gate towers.

Sizemore and Maggie looked at one another.

"No, Lord," said Maggie. "Lord Stanley had always gone without his own livery. He let his Warlords choose their own, but he never took one."

"Oh," said Parson, squinting up at the banners. The sun went behind the tower's edge as they stepped into its shadow. He could instantly see it better. "Then who did these?"

He turned around and looked at Maggie and Sizemore, standing in the edge of the tower's shadow. The shadows of soldiers moved around between the teeth of the tower on the street behind them. "Um...what?"

Sizemore and Maggie exchanged glances again. Sizemore cleared his throat. "Hav- Having a Dirtamancer in your city when you upgrade it reduces the cost by a lot," he began.

Parson tried to see where this was going. "Okayyyy..."

"But it means the Dirtamancer sets the appearance, the shape of things...and the livery." Sizemore looked apologetic.

Parson raised his eyebrows. "You designed this whole city? Including the banners?"

"We did, Lord," said Maggie, matter-of-factly. "We were linked." 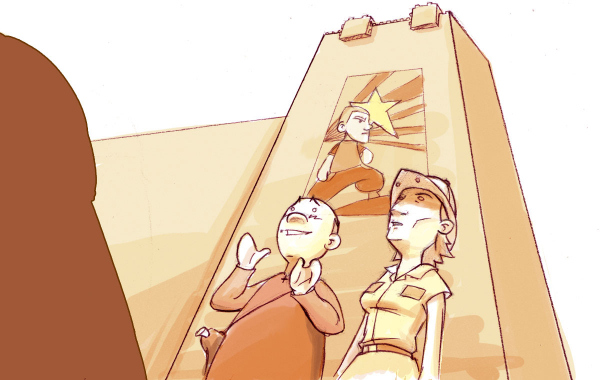