She had missed the power.

Not since her second mission as a barbarian had Jillian ridden a megalogwiff. She'd had four with her when Faq fell. She lost them all on that outing, and very nearly her life as well.

It was a mercenary gig she should have passed up. Far across the southern desert wastes, where the cities were all minarets and onion domes, she'd agreed to fight for Lord Shelby the Cobra. He was a vile man, like a fat, brown Stanley with a beard. He directed her to scout an outlying city held by Dagwood, the side he was in the process of conquering. He said to take it and sack it if she could, and led her to believe that might be possible.

He lied. The whole area was home to the enemy's reserve of natural allies. Three stacks of Sand Witches engaged her in an ambush. She shed a third of her units just to get out of the hex, but fled the wrong way.

Right into the waiting Man Witches.

Good times, right? She smirked and shook her head, and kicked her mount hard, just to hear the thump. "Yah!"

Oh, this was a fine beast. Three times the size of mount she was used to. It had popped in the capital that morning, and she saw it had the move to take her the whole length of her little Queendom and back. So she told her new Warlords, too bad; she was taking it out herself. Alone.

The river wound its way below her, and the Queen crossed over it again and again in her straight line path. As she soared over the rushes, she felt the tickle of an incoming Thinkagram. That would be Bunny, with Don King. She pulled the beast up and hovered over the water. Out here by herself, it was a good time for the call to come in. She would probably be yelling a lot.

Eh, but who knew? Maybe he was ready to meet her demands on the heir thing. Certainly his last offer had not been--

"Good day, your Royal Highness, this is Charlescomm calling," said a blue-garbed Archon in her head. "Will you hold for Charlie?"

"Oh," she said, suddenly feeling chilled and exposed. This raised so many questions so fast that all she could say was, "Sure." If it was some kind of ambush, then she was already caught. She scanned the airspace of adjacent hexes.

"Thank you, one moment."

"Your Highness," said a pleasant, male voice. There was no image with it, just a slowly changing pattern of soothing colors in her mind. "I don't mean to alarm you. I only want to talk. There are no Charlescomm units in Faq's battlespace."

"Fine," she said, with an edge to her voice. "Good. How do you know about the new Faq at all, Charlie?"

"Your Highness..." The voice sounded pained and apologetic. "Questions about how I know things are some of the most problematic for me in terms of providing an answer. I'm in a complex position, in which I have access to the proprietary information of many clients, and constraints both ethical and contractual governing the release of--"

"Yeah yeah. All right," said Jillian. This guy was the worst. "What do you want then?"

"In a nutshell? Talk to me." said Charlie quietly. "Look, Your Highness...no Royal side west or south of me will even take my calls, let alone hire me."

"So? Work for Stanley," Jillian sneered. "You already are, is what I hear."

"It's not true!" Charlie suddenly exclaimed. "Slately is telling people that to scare them into the Coalition!" It actually sounded like Charlie's composure cracked, at least a little bit. But Jillian assumed everything this man did was an act. She never trusted him back when he was her main competition for mercenary work. And now that he'd apparently found her "secret" kingdom...

"Right. So you're lonely, and you just want to talk."

Jillian pursed her lips. "Yeah. Six or seven cities in two dozen turns...nobody knows where they get their troops but they've got the Arkenpliers, so possibly..."

"And more, very soon. And I have good intelligence on how they're managing it."

Jillian tried to look around at the green valley, to get her bearings. Thinkagrams were disorienting. She patted the megalogwiff's fat neck. What game was Charlie really playing at this point? You never knew. "Look, Charlie, I'm gonna be blunt here. From what I hear, everyone assumes you're with Stanley, because of your attunement. Every Royal side is treating this as the War of the Arkentools."

"Every side, Your Highness?"

"Me, you mean? I just wanna croak Stanley." Gah, why was she telling him that? Titans...

"You may want more than that," said Charlie. "I certainly do. But croaking Stanley the Tool would be a good start for both of us."

"Huh. Really." That was a surprise. Disband it...now she was interested. How did he always manage that?

"Queen Jillian, you were not the only one who lost much at the Battle for Gobwin Knob."

Her eyes narrowed. "You didn't lose what I did, Charlie."

"I lost more than you can know," he said. "My secrets have been compromised. You can't imagine what that may mean."

She mentally compared the loss of Prince Ansom to the loss of Charlie's trade secrets, and scoffed.

Charlie pressed on, though. "And you didn't lose what you think you did. Not completely." The image in Jillian's mind turned into a strange picture. It was a set of drawn velvet curtains, in deep blue. "I need to show you something. If you find this as disturbing as I do, please consider accepting my counsel and assistance, both in secret."

She shook her head in bewilderment. Her mount shifted beneath her, nervously. "All right."

The curtains pulled back. Behind them was a still image, in full color and excellent clarity.

"The Chief Croakamancer and Chief Warlord of Gobwin Knob, six turns ago, as they seized the city of Orgchart." 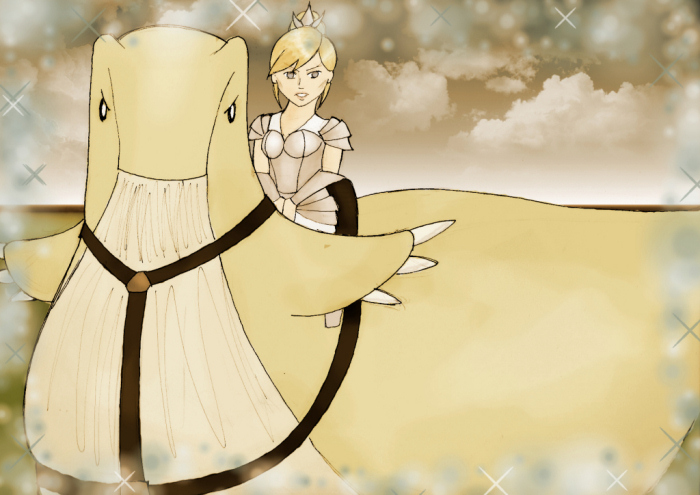 Guest art by Laurel B, aka PhoenixTalion on the Erfworld forums.