Ants in the plants

As Fumo got better with the cutlass, the bark began scaling off in longer, thicker strips. The stuff was spongy and porous, like fresh-baked bread.

He would never taste bread, either.

On his downswing, the world went...not white, but a negative black. He lost his senses to an all-consuming light and a deadening hiss in his ears. Then the pain resolved itself to a mere fireplace-poker burn on the side of his neck. He shuddered his shoulders, but did not try to slap away the ant. Ants.

His blade, he could see, had skipped off the trunk and taken another piece of palm leaf from a tattered bush. There was no “getting better” at this. Not at tree-hacking, or at anything else. He’d had his chance. Two chances, he admitted.

He’d popped with ten move. It took a full move’s worth of scouting to confirm that all six hexes surrounding him were also dense jungle, each with a terrain penalty of four to enter. There were no roads and no trails to be seen at the boundaries, no lights or fires visible through the underbrush, no hints of smoke or flyers in the sky, and nothing in the animal sounds to indicate one neighboring hex or another as favorable for hunting and forage.

It wasn’t a complicated choice, really...just one simple roll of one simple die, for one simple level 1 warlord in the wilderness.

Fumo had sat on a log for a millionturn or so, contemplating the decision. For the better part of his whole life, in fact, he just sat and smoked. Time seemed undemanding of him, unconcerned that he was wasting it. It marked its own passage with a brief rainshower about every twenty-five minutes, but otherwise, he might have had forever to make up his mind. What did the world care? Was he in someone’s battlespace? Couldn’t he simply sit here forever, like one more oddly shaped mushroom on a mossy log? He could get used to the rain...

After he had burned through one full box of twenty, he held the other pack in his hand and stared at the label. “SAIL ’EM” it read. There was a design above the letters that he only now recognized as the sails of a ship, where the little apostrophe was a flag, flying from the...back side of a ship, whatever the word for that was. The paper tab was imprinted with an anchor. 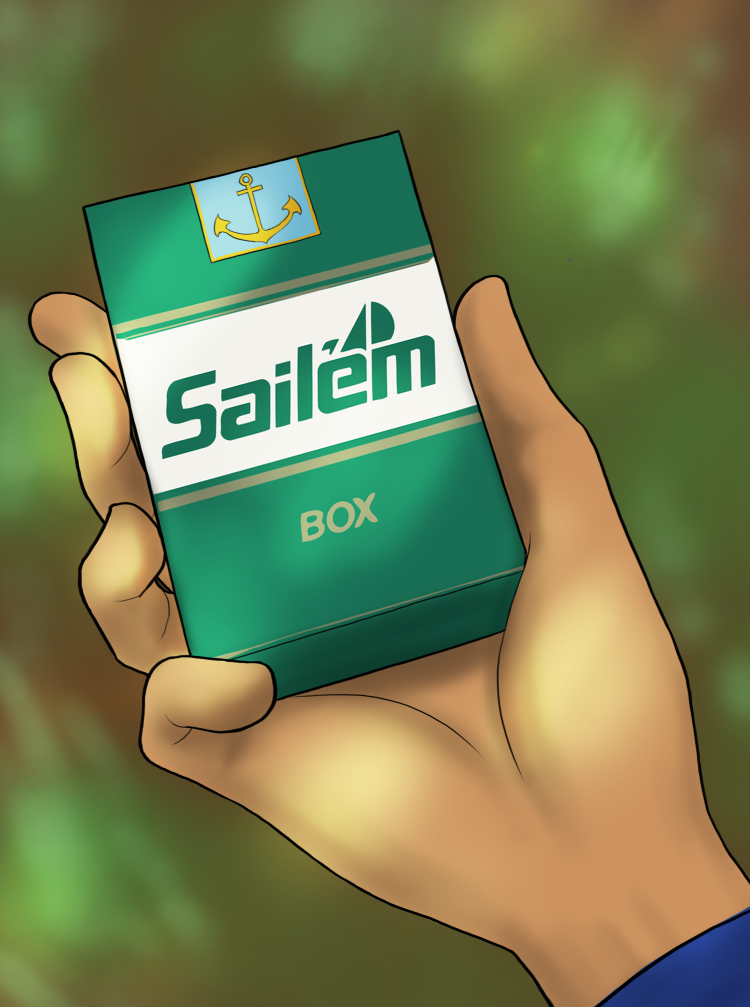 Why? Why a nautical emblem on his smokes? Why was he wearing a naval officer’s jacket and wielding a basket-hilted cutlass? Why the sodden captain’s hat?

He was no seafaring unit. He knew what the sea was, what a ship was, but he would never see those things, either.

Rather than peel the anchor seal and begin to burn away the modest ration of life he had left, it suddenly seemed urgent that he be anywhere other than sitting on this log. He’d just have to pick one of his hunches, and slash his way forward.

Well, that’s what he had done.

The little anchor was torn now. He’d already smoked another two sticks. A third, unlit one dangled from his lips, as he tried to pile up the flakes of pale blond bark into something resembling an ignitable campfire. The soil here was made of black and leathery leaves, all slick with rainwater and crawling with even blacker ants.

With no move, there were no more big decisions remaining to smoke on. No more ever, probably. His only war was with the ants, but smoke might be the answer there.

Fumo didn’t know what kind of ants they were—he hadn’t popped with any woodsy-type specials, either—but he was vaguely certain that the way to deal with an insect hazard was with smoke. The ants certainly did not like it when he blew ciggy smoke at them. With a fire, and then maybe a whole circle of burning or smoldering wood, he might be able to create a place in this hex where the ants would not march.

Or...maybe he’d inferno the whole hex. That was probably not possible in a rainforest, but if it happened, it happened.

They stung him twice more before he was happy enough with the bark pile to thumb-flick his ciggy to life. Kneeling there, he took a deep drag on it.

“Whatever you are,” he said, with a thin and humorless smile, “you’re fire ants now.” He stuck the lit end into the shallow cup of bark-dust at the center of his construction. “Boom. Roasted.”

He’d now tested the bark from five other kinds of tree in this hex, and all of them managed to at least smolder. One of them had tufts of fiber that went puffy when you pulled the bark away from the trunk. This loose fiber lit up just like (he imagined) fireworks.

Only the bark of that one tree he’d spent an hour hacking away at—the bread tree or whatever it was—wouldn’t light at all.

“That Tree” now played a part in Fumo’s final battle plan, though. He had it surrounded with a ring of the fiber-works bark. Inhaling his second-to-last smoke down to a dogend, he flicked the butt into the ring and scampered up the side of “That (Fireproof) Tree.”

He kept his attention on where he was placing his hands, and did not look down. There weren’t too many ants on That Tree, but covering one over with your palm would earn you the extraordinary pain of a simultaneous bite/sting combination.

A sudden light on the underside of the jungle canopy above him and the heat on his damp woolen dungarees was all he needed to know the thing had caught. He had ignition.

Now he only needed a safe perch, to watch the world burn.

Fumo believed he had learned the lesson about testing his plans. He’d practiced this climb twice, just to be sure he could reach his chosen seat: a hollow at the crotch of a major limb, a decent height from the ground.

That sitting spot was only a single handhold above him now. One more pull. He reached up with extra care and grabbed it to heave himself up.

As a result of the extra care, Fumo did not notice the frantic scramble of ants all streaming out of the hollow to flee from an emerging wisp of smoke, until many of them were using his face for a fire escape.

The elves laughed. They laughed at everything, funny or not. Especially not.

Fumo shook his head. “I was sure I didn’t.” He had a clear memory of the trunk of That Tree, including its barkless bottom part, rushing by his face as he fell to the ground, fell into the rising flames of his fire circle. In that memory, his lips were tightly shut. His only (crazy) thought at the time was to keep the ants from running down his gullet and stinging him from the inside.

And the punk elves cackled again.

They were weird ones (if Fumo could possibly judge anything about the world as usual or unusual), wearing torn blue and black raiment, with incomprehensible war paint on their skin and silvery pins and rivets stuck in their bodies and clothing. Their pigmented, spiked hair made their whole heads look like colorful weapons.

“If you say so,” shrugged Fumo.

He looked away, into the blackness of the nighttime jungle. The chitters and creets of a billion night bugs filled in the visual blank with an endless high-pitched scream, kind of like the one the elf-chief was accusing him of.

The only lights out there were the dozens of pinpoint glowing embers, which filled his every breath with a sappy-smelling perfume.

The insects he cared about—the ones he’d gone to war against, and lost—were no longer around. Because of the punks, and the fragrant smoke they produced.

By only the light of the fading ciggy in his mouth, Gobber held up the empty box of Sail’ems.  “Y’get two packs a turn, yeh? You sure?”

“That’s what I popped with.”

The elf-chief nodded at the green-haired one called “Chucks,” who took it as an order. Like a coin flip, Chucks thumb-flicked the tiny white gem that he was holding.

Between the darkness and the swelling of his stings, Fumo missed the catch. While the elves laughed, he gingerly rooted around the soil. But he found the little opal immediately, and nothing bit him.

“We gotcher for one turn, nen,” said Gobber, “but we wannem boaf.”