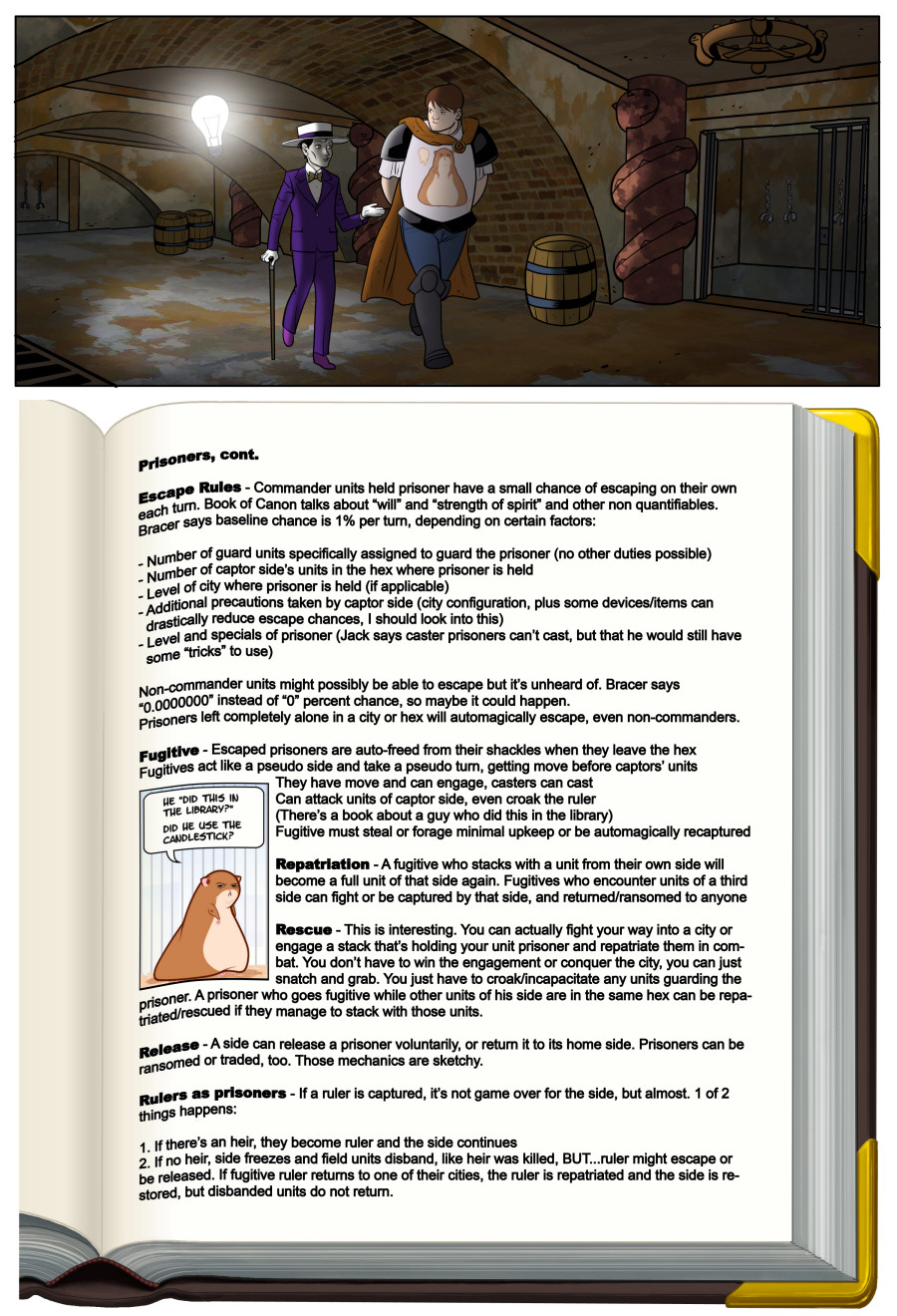 Escape Rules - Commander units held prisoner have a small chance of escaping on their own each turn. Book of Canon talks about “will” and “strength of spirit” and other non quantifiables. Bracer says baseline chance is 1% per turn, depending on certain factors:

- Number of guard units specifically assigned to guard the prisoner (no other duties possible)
- Number of captor side’s units in the hex where prisoner is held
- Level of city where prisoner is held (if applicable)
- Additional precautions taken by captor side (city configuration, plus some devices/items can
drastically reduce escape chances, I should look into this)
- Level and specials of prisoner (Jack says caster prisoners can’t cast, but that he would still have
some “tricks” to use)

Non-commander units might possibly be able to escape but it’s unheard of. Bracer says “0.0000000” instead of “0” percent chance, so maybe it could happen.
Prisoners left completely alone in a city or hex will automagically escape, even non-commanders.

Fugitive - Escaped prisoners are auto-freed from their shackles when they leave the hex
Fugitives act like a pseudo side and take a pseudo turn, getting move before captors’ units
They have move and can engage, casters can cast
Can attack units of captor side, even croak the ruler
(There’s a book about a guy who did this in the library)
Fugitive must steal or forage minimal upkeep or be automagically recaptured

Repatriation - A fugitive who stacks with a unit from their own side will become a full unit of that side again. Fugitives who encounter units of a third side can fight or be captured by that side, and returned/ransomed to anyone

Rescue - This is interesting. You can actually fight your way into a city or engage a stack that’s holding your unit prisoner and repatriate them in combat. You don’t have to win the engagement or conquer the city, you can just snatch and grab. You just have to croak/incapacitate any units guarding the prisoner. A prisoner who goes fugitive while other units of his side are in the same hex can be repatriated/rescued if they manage to stack with those units.

Release - A side can release a prisoner voluntarily, or return it to its home side. Prisoners can be ransomed or traded, too. Those mechanics are sketchy.

Rulers as prisoners - If a ruler is captured, it’s not game over for the side, but almost. 1 of 2 things happens:

1. If there’s an heir, they become ruler and the side continues
2. If no heir, side freezes and field units disband, like heir was killed, BUT...ruler might escape or be released. If fugitive ruler returns to one of their cities, the ruler is repatriated and the side is restored, but disbanded units do not return.