They took his spear.

Wrigley was a Stabber, Unaroyal Infantry. Some stabbers had swords, but Wrigley was a Spearman. He was never without his spear. It had popped with him.

But they took it away from him. Somehow, that was all he could think about.

That, and how he'd never stabbed anything, Not ever. Only in practice. All those turns of practice stabbing an enemy unit, and he had never stabbed one. It wasn't right.

Back when they took this city, Wrigley had been there. From the grand city of Unaroyal where he had long served, they'd first marched him to powerful Unabrow, then to a smaller, uglier town called Unatard. Unatard had just been reclaimed from Gobwin Knob, and the growing Coalition had Lord Stanley's forces on the run, falling back every turn. Not long after that, they had ordered his regiment to a frequently-conquered border outpost called Bohica. From there, they had promised him some real action at Warchalking.

But the Marbits did most of the work at Warchalking. The city fell, repelled a counterattack, and Wrigley took up yet another stretch of duty patrolling yet another city wall.

He had been so bored, all his life. Each turn had passed so slowly. Why did they all seem so brief now?

He was on his knees in the mud. His hands were held with the shackles that popped on his wrists the moment Warchalking's Garrison fell.

They had come in so fast, the attackers. Like the gate wasn't even there. The city had no warlord, and his orders were to stand fast, so he did. But Stanley's men were stabbing for the heart, and he was a toe. The Garrison was wiped out almost before he could turn around.

The Chief Warlord? A high-level Caster? Twelve stacks of heavies, knights, dwagons and Archons? For this dumpy town?

He wanted his spear.

The other infantrymen knelt in the mud in a line to either side of him. They were forbidden to speak or raise their heads. But he stole a glance or two, and he had ears. He knew what was coming.

The Chief Warlord of Gobwin Knob was following the Caster, down the line of prisoners. With them was a knight with a broadsword. They were about three men away from him now.

It was funny. In all of those dull hours, all of that time for thinking, he had never much thought about what his life might mean. He had always assumed he would do great deeds some turn in the future, and that would give his life meaning. But he was out of future. And all he felt about it was something like idle curiosity.

It was said that the Titans took pity on those like him. He would not see the City of Heroes, no. But no man was a failure who had served dutifully, they told him. He heard the man beside him cry out with the blow of a broadsword, and saw him fall forward.

He heard the squelch of footsteps in the mud behind him. He found he didn't much care what was going to happen to him now.

He only wanted to know what would happen to his spear. 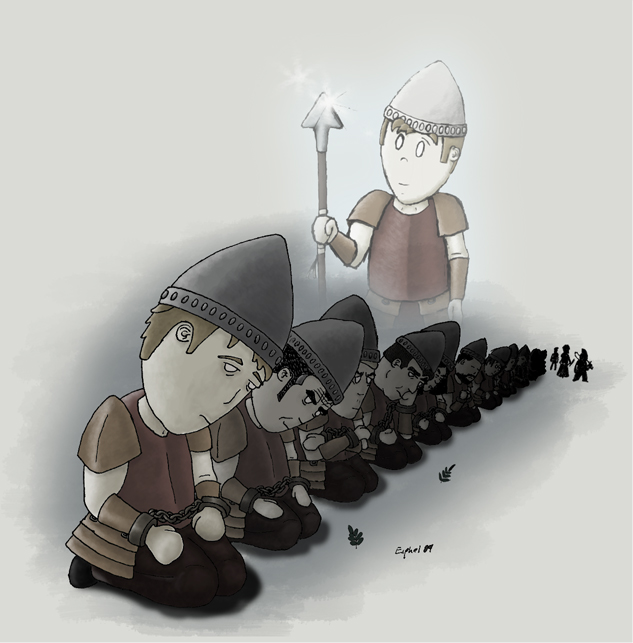 Guest art by Phil Barker, aka Eiphel on the Erfworld forums