There were four dwagons: a green, a blue, a plated red, and a yellow. The rest were away with Wanda and Ansom on the road to Warchalking.

Squinting around the sky, it looked like only the red and the yellow were saddled. Parson looked at the red. It was the biggest one, the one most likely to be able to carry him, if size counted for anything in Erfworld's magical flight mechanics. But that was Stanley's personal mount. Even his Bad Idea Bears™ ("Apple" and "Jack") weren't going there.

The yellow it was, then.

"Speaking or shouting the command will work, Lord," said Maggie, lurching a bit as she rounded the remains of the picnic and walked up beside him. Though he was not completely steady himself, he offered his right elbow and she grabbed it gratefully. "Not be- because they understand Language, but because it hhhelps you frame the intent in your mind. You see. Experienced-" she swallowed hard, or possibly hiccupped. "Excuse me. Experienced commanders can command stacks with few or no words. When you understand your command, the unit will. Yet another fo-horm of natural Thinkamancy, Lord."

Parson blew out a fruity-smelling breath and drew in another. "Okay. Hey! Yellow dwagon!" From four hundred yards off, it turned its head toward them and snorted. "Yeah! C'mere you big...goddamn flyin' banana!"

The dwagon J-hooked into a dive that took it swooping over the rooftops, directly toward them. Its wings were stiff and swept back as it covered most of the intervening distance in a single glide. As it neared their tower, it pumped its wings hard, three times. It took the tower like there was an invisible skate ramp up the side. Parson jumped back as it topped the parapet. The beast took up an indignant hover just above them. Parson could almost feel it asking, "WHAT?!"

Maggie let go of his arm, as he took a step toward it. Sizemore pulled the picnic blanket away.

Immediately, the dwagon raised its wing tips and drifted down gracefully. It planted its rear feet on the stone flooring, followed by the front claws. Its wings snapped and folded like a Japanese battle fan, and its stomach spread out on the floor.

"They are pretty amazing," said Parson, looking at it closely. It looked at him equally closely. "It just...came down like a dandilion seed, but it's the size of what, a van? A bus? A short one, anyway." He walked up to it and touched its scales, which were hard and slick, and felt like ceramic when he tapped them. He touched the saddle, too. Shiny leather, steel stirrups, braided leather reins. Probably too small. "Yeah this prolly has a lot in common with riding a short yellow bus. Okay, hold still!" he commanded.

On the third of three undignified tries, Parson got into the saddle. Planting his armored belly on the saddle horn and swinging his leg over the creature's back could not possibly be the best way to get mounted, but it got him there. The dwagon grunted and snorted in discomfort, or possibly simple disbelief at the situation.

Parson picked up the reins. He squirmed into a sitting position that his crotch could live with, and grinned at Sizemore. He knew he had to look like the fat kid on the coin-op ride outside Kmart. Hell, he'd been that kid once. Sizemore looked disapproving, but said nothing.

"Banana!" he commanded. "Fly me to the Tower of Efdup!"

Banana the dwagon, as it and Parson both understood was now its name, shuddered once. It unfolded its wings. It sat up, lifting Parson up a few feet. He held on. The dwagon flapped.

They did not rise.

It flapped harder, stirring up a breeze on the top of the tower like a helicopter draft. Still, they were not showing signs of lift. Sizemore put his hands on his hips. "I told you, Warlord."

Parson looked down at his struggling mount. "Yeah. I dunno." He looked up into the air. They had attracted the attention of the Archons, who were drifting over to see what was happening. "Maybe with a running start..."

Commanding a stack is a kind of art form, Parson later learned. Even speaking units have a certain intuition for their warlord's intentions. The commander himself has to be sure about the difference between issuing a command and thinking out loud.

Banana turned and lurched forward toward the edge of the tower. Parson was too stunned at the development to say more than "Urrk," as the dwagon planted its foreclaws on the stone merlons and vaulted itself over the edge, unleashing a mighty roar.

As time slowed down, the first thing Parson thought about was the fact that time was slowing down. He wondered how this would fit into his understanding of relative time in Erfworld.

The dwagon was falling, more or less straight down over the side of the tower.

He then noticed that one of the Archons had her fingers up and was "filming" this event. He had time to wonder who might be receiving the live feed of this view, or if Archons could "tape" the events they saw, and play them back later. He thought in this case that would be useful for talking to the insurance company.

He also thought that "Maybe with a running start" was a terrible set of last words. He should at least have said, "Y'all hold my beer and watch this."

Finally, he realized that time couldn't possibly be slowing down this much. He looked back up at the edge of the tower, and saw two small, worried faces looking down at him. He and the dwagon actually were falling unnaturally slowly. But definitely falling, not floating.

The ground came up, and Banana squashed into it, face first. The impact was hard enough that Parson was thrown out of the saddle and rolled on the bricks twice. As he lay in a heap, the nearby pikers immediately scrambled to his aid.

The dwagon roared angrily, and took off into the sky, leaving a steaming pile of acidic battlecrap on the pavement.

Parson sat up, with some pain. He had scraped up his hands, elbow and forehead fairly badly. A dozen concerned pikers were standing in a circle looking down.

One of them handed him a handkerchief. "Lord?"

Parson looked up at the circle of small men. "I bet you think that was really stupid," he said to them.

No-one said a word. He put the handkerchief to his bleeding elbow. "Well, yes," he admitted, "yes it was." He grinned. The faces looming over him were suddenly hilarious. "But you gotta admit, you gotta admit! I learned something today!" 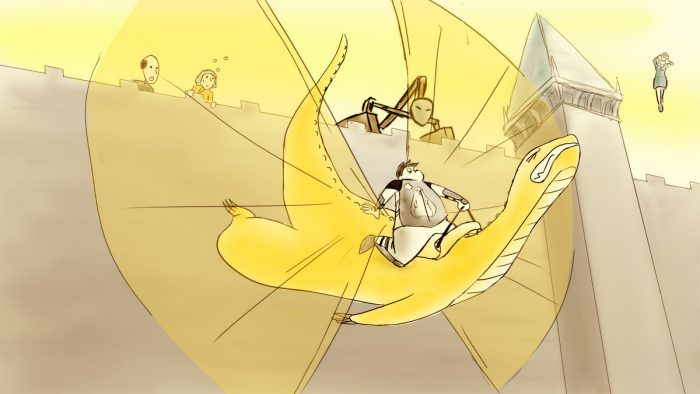